How Does Credit Reporting Help Out the Credit System?

Credit reporting is vital to the credit system. But wait, back up a second.

Did you know that credit card interest rates in some countries are over 200%? 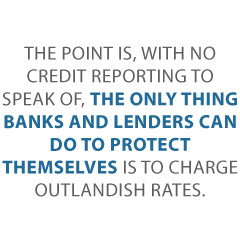 Rates this high are common in countries where the credit systems are not well developed. So for example, in Brazil the credit interest rates have averaged over 300%. There, certain aspects of credit reporting that are taken for granted in the United States credit system have not historically been allowed. The rules are changing, though. So we can expect it will bring the interest rates down some.

What Else Does the System Do?

In the United States, having business CRAs and their reports means that there are (at least in theory) objective measurements of how likely a business is to pay its bills.

B2B Commerce Becomes a Lot Less of “Who You Know”

This means that a business owner does not need to personally know the owners of a company he or she is dealing with. As a result, businesses can more confidently cross state lines—and even international borders—when it comes to finding good customers.

Furthermore, having reports and a system helps newer entrepreneurs and their startup ventures to break into business and compete better with more seasoned businesses. Otherwise, if you wanted to do business with a company, you would ask your fellow business owners. If they know a company, they could give you the lowdown. But for newer companies, your business peers probably wouldn’t know the owners well if at all.

As a result, and with no payment history between them, it would be a big risk to do business with a startup company. And most entrepreneurs just plain are not willing to take a chance on an unknown, unproven business.  And if they ever decided they were willing to roll the dice and take a chance, it’s highly likely that it would be very little money.

Hence you could technically break into an industry. But it would take a lot more time and energy. Certainly a lot more than most business owners have—they’re busy running their businesses!

And this doesn’t even take into account the possibility that a business peer might have an axe to grind. They might be unfairly negative in their assessment of a new company. Or there could be an undisclosed relationship between the business peer and the new business owner. This could create a situation where the business peer is too supportive and positive in their assessment. Particularly if the objective facts don’t warrant such a high level of confidence in a son-in-law’s (for example) new business.

And, business peers either in direct competition or considering it could even ditch their ethics and completely steer you wrong.

Subjective Personal Assessments Could Even Be Tarnished by Sexism, Racism, Antisemitism, etc.

While we always hope that our fellow human beings are honest, forthright, fair, and are committing to treating everyone equally, sometimes they just aren’t. For industries dominated by one race, gender, sexual orientation, religion, etc., business owners might not even be consciously aware that they’re circling the wagons when someone who doesn’t look, sound, love, or pray like them tries to join the party.

… an informal system by which money and power are retained by wealthy white men through incestuous business relationships. It is not necessarily purposeful or malicious, but the Old Boy’s Network can prevent women and minorities from being truly successful in the business world. It entails establishing business relationships on high-priced golf courses, at exclusive country clubs, in the executive sky-boxes at sporting events, through private fraternities or social clubs, et cetera. These are arenas from which women and minorities are traditionally excluded and thus are not privy to the truly serious business transactions or conversations.

What About the Credit Reporting System in the United States?

In the United States, the credit system is far from perfect. Privacy and consumer protection concerns often lead people to believe that the system as a whole is a problem. The reality is, we need data collection, tracking, and reporting practices of a functioning credit system, loans and credit. Because without them, credit would quickly become unbearably expensive.

There is one reason we can get credit cards with reasonable terms. And it is the reason we can get lines of credit, personal loans, business loans, and more. And we can do so without breaking the bank. So it all boils down to the fact that we have a fairly efficient and well-functioning credit reporting system. So it may be imperfect. But it is a lot better than it could be.